Union Center Fire Company started in 1947 with one station located at 1805 Union Center Hwy. Over the years this station has been expanded, by purchasing neighboring property in 2006, and building a larger station to meet the needs of the community. This station is now located at 1811 Union Center-Maine Hwy. As the population grew and shifted to the North Side area, a second station was needed to serve this area as well. A two-bay station was built at 1209 Taft Ave. and has since been upgraded to a four-bay station.

Union Center Fire Company started a First Aid Team in the mid-1960's. In 1992 an EMS team was formed. The team is made up of personnel with CPR training, New York State Certified First Responders, Emergency Medical Technicians, and Paramedics.

The EMS team is trained to use an Automatic External Defibrillator (AED) for cardiac arrest patients, Oxygen, and airway management equipment - all of which is contained in our EMS response vehicle.

The equipment and personnel are dispatched to respond in advance of an ambulance to get medical aid to a patient as quickly as possible.

All emergency calls are received at Broome County's state-of-the-art 911 Communications Center. All alarms are radio-dispatched to our personnel through this Center. Upon receiving an alarm, members respond to the station and respond the proper emergency equipment to the scene.

In 2006 Western Broome County Fire Departments including East Maine, Endicott, Endwell, West Endicott, West Corners, and Union Center initiated the Engine 98 program. This initiative, designed to compensate for the diminishing number of volunteers available during the day, places a "On Duty" Engine staffed with at least 4 Firefighters between 7am and 5pm Monday through Friday.

The goal was to reduce the response times and ultimately getting an engine crew on scene of incidents quicker, to minimize threat to Life and Property during daytime hours when volunteer firefighters are often unavailable.

This program has proven itself on several different occasions and is a success story many neighboring departments have shared as they develop similar initiatives.

Use arrows below to scroll through Directors

Use arrows below to scroll through Officers

The mission of the Union Center Fire Company Auxiliary is to SHARE.

Honor the service and sacrifice of firefighters and their families.

Assist the Fire Company in raising funds for equipment and community awareness by holding events and activities.

Represent the Fire Company at functions and events.

Encourage community support of the Union Center Fire Company and its members.

We are always happy to welcome new members at our meetings which are the second Wednesdays of every month at Union Center Fire Company Station 1 at 6:30 P.M. 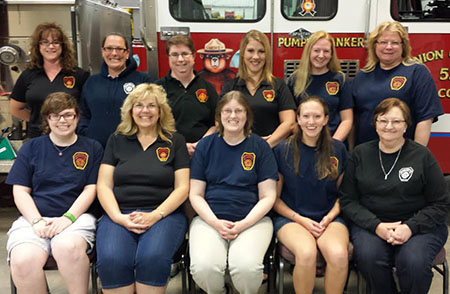